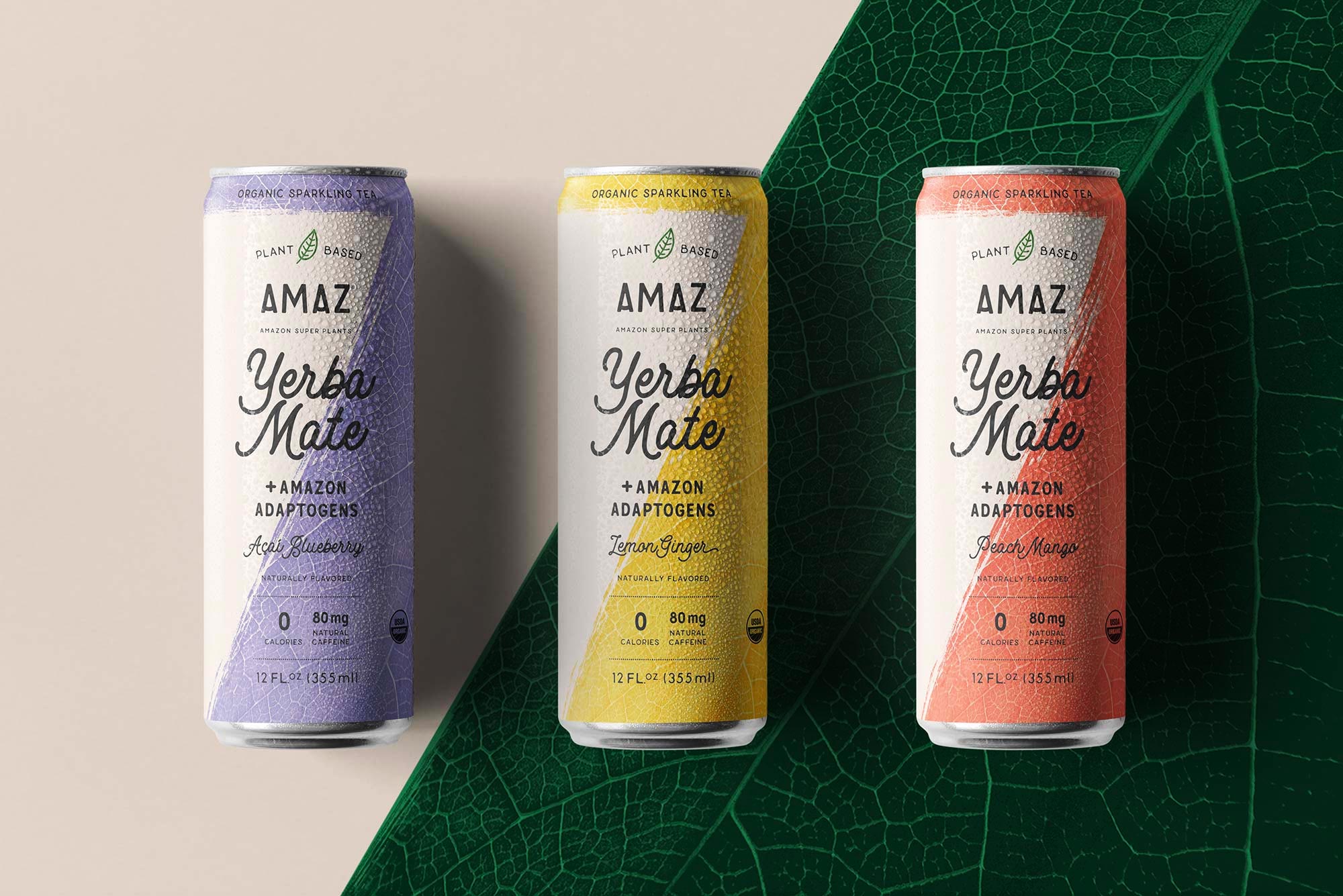 Founded in 2018 by CEO Gustavo Nader and CMO Demian Moraru, AMAZ launched with a line of juice-based elixirs, promoting the beverages as containing “superplants” and antioxidants. The company has now discontinued its original portfolio and is relaunching with a canned yerba mate line.

The new drinks are available in three flavors: Acai Blueberry, Peach Mango and Lemon Ginger. Each 12 oz. can contains 80 mg of caffeine, zero calories, zero sugar and has a proprietary blend of ingredients including yanomami mushrooms, suma root, acerola cherry, green tea and guarana. The products retail for $2.79 per can.

According to Nader, the original AMAZ product served as a learning process for the company as the founders (originally from Brazil) sought to navigate and understand the U.S. beverage market.

“The initial product that we launched was more of a concept product,” Nader said. “The idea was to test the hypothesis we had with the beverage and getting to know how to improve.”
What they found was that although the elixirs were well received within health and wellness communities, particularly at yoga studios and sporting events, the original formulation and branding was too niche to expand into the mainstream. The drinks were sold for over a year in California Whole Foods and Erewhon locations, Nader said, but as AMAZ looked to expand, the company conducted a study, getting feedback from over 30,000 consumers, and went
back to the drawing board on its product line.

The relaunch, however, coincided with the onset of the COVID-19 pandemic last spring, putting the company in a vulnerable position as it pulled its existing products from shelves during a period of deep uncertainty across the industry. According to Nader, the company raised $1.3 million from investor Vinicius Biagi Antonelli — an entrepreneur focused on regenerative farming in Brazil — to help fund the development of the yerba mate line.

Having grown up drinking yerba mate in Brazil, Nader and Moraru said they recognized the beverage’s emerging popularity in the U.S., led by brands such as Guayaki. The company secured ingredients from Origens Brasil, an ethically-sourced supplier in Brazil, which focuses on environmental sustainability, and developed a zero sugar, better-for-you alternative to competing yerba mate brands.

“Yerba mate was a very obvious choice,” Nader said. “First because of the growth the category is seeing in the U.S., and second because it is aligned with our values.”

AMAZ is not the only brand to turn to yerba mate for a relaunch platform in recent months. In February, iced tea brand Steaz announced a comprehensive brand refresh, introducing an organic yerba mate line in 16 oz. cans. Those products, however, contain 14 grams of sugar per serving.

AMAZ’s new line is rolling out now in Erewhon and Whole Foods stores and will launch online direct-to-consumer next month. Moraru said AMAZ will focus heavily on the online channel, including a text message sales platform and a robust influencer program. The company is also working with pre-seed sales platform SeededCPG, a new brand building project launched by Koia and Limitless co-founder Chris Fanucchi.

The company has also partnered with Xingu Seeds Network, a nonprofit organization helping regrow trees in the Amazon rainforest, and has pledged 2% of proceeds to the environmentalist project. AMAZ’s ecological mission, Moraru said, will be an important part of its messaging going forward and the company has filmed promotional materials in both Brazil and Los Angeles to educate consumers on how the rainforest benefits their everyday lives.
The company believes that if consumers see the direct connection between a quality, functional product like AMAZ and the resources of the rainforest, they will be more motivated to protect it.

“We are showing that day to day that we can all use products from the Amazon,” Moraru said.

“Our [drink[ blend is very functional, it’s not just energy, but we are talking about energy, focus, immunity. So [through that] we want to show people how the Amazon brings more value to them, because that’s the way to preserve it.”